15th June school reopened via online mode and offline regular school commenced on 20th June. Students were welcomed with chocolates and a welcome speech via the intercom. Later during the day, prize and certificate distribution ceremony of standard 9th for academic excellence was conducted in the auditorium. Also, the textbook distribution ceremony for standard 5th was conducted by the guest of honour, Mr Sudesh Shetty and Mrs Asha Shetty, the proud parents of Ms Tirtha Shetty (an exemplary ex student of our institution who stood first in the ssc board examination).

of 8th A and 8 B at 7:30 a.m.under the guidance of supervisor of Morning shift Mrs. Reshma Kishanchandani and Head mistress Mrs. Radha Narayan.

French day was celebrated with great enthusiasm by the French students of standard 8th 9th and 10th. The students had prepared speeches, dramas,poetry and other acts of performance putting in weeks of efforts.THE FRENCH NATIONAL DAY 14TH OF JULY was CELEBRATED BY ‘VIVANTS VIVEK ‘ FRENCH STUDENTS EVERY YEAR SINCE LAST 15 YEARS.A COLOURFUL REPERTOIRE OF FRENCH SONGS ,

DANCES , CHARTS , MODELS ARE PRESENTED BY ALL THE STUDENTS…IT IS INDEED DELIGHTFUL TO WATCH THE FRENCH PLAYS SCRIPTED AND STAGED BY EVERY CLASS AND EAT CREPES, MOUSSE PREPARED BY STUDENTS! 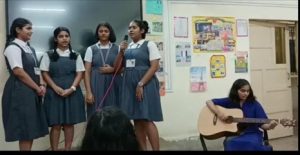 Aashadi Ekadashi was celebrated by the students on. Students had prepared skit, drama, poetry, dance performance (solo and group) for the occasion. Students dressed up as Vitthal and Rukhmani were also part of the show.Prasad was distributed.

Swami Vivekanand High School celebrated 75 years of independence with great pomp and show. Students of standard 5th and 6th had participated in a fancy dress competition themed –‘ great Indian Patriots and leaders’. Students had dressed up as various leaders like Rani Jhansi, Mahatma Gandhi, Narendra Modi, etc. The program was spearheaded by Mrs Leena Sachdeva under the able guidance of the supervisor and principal of the school.

Teachers also celebrated the independence day by tying tricolor Rakhi on each others wrist to symbolise brotherhood and fraternity.

Swami Vivekanand High School celebrated 75th independence day in a very enthusiastic manner. The flag was a hoisted and it was followed by a program in the school auditorium where in students of High School and junior college performed various acts like monologue, drama, song, dance, etc.

Tanvir Gurnani of standard 5th A won a silver medal at the district level taekwondo championship held at Chembur.

Mohit Gandhi of standard 10th B won a gold medal at the district level taekwondo championship held at Chembur.

Elocution competition for students of standard 8th to 10th was conducted. 14th September

Hindi diwas was celebrated with great enthusiasm. Hindi poetry recitation competition was conducted on this day and students from standard 5th to 8th participated in the same. Students of standard 9th and 10th gave speeches pertaining to the importance of Hindi language and also put up various dance acts highlighting the importance of our national language.

Our school was the host for M ward level singing competition. Approximately 26 schools had participated in the competition which was conducted in the school auditorium

Elocution competition of students of standard 5th to 7th was conducted. Students had prepared speech on any one of the three given topics. Two eminent judges , Mrs Karuna and Mrs Mahua were present on the occasion .

was held on 25th September 2022 at Belapur, Decathlon 5k Marathon

Mohit Gandhi of standard 10th B participated in the State level taekwondo championship which was held between 1 oct to 3 oct at Nashik , divisional sports complex. He won a bronze medal.

Get in touch with us